So what if I’m sketchy

I took an art class last night where I drew some of these people. What’s special about the art class is (points fer yall who’ve been following along via facebook and know what I’m about to say) that it took place in a pub. A wonderful, dark, seedy, gritty, delicious little pub with stained glass windows, a bunch of nooks, a couple crannies (crannys?), and a man wearing a beret who played a card game against himself. And no, it was not solitaire.

You know what pubs do, right? Yeah, they serve you BEER and you get to DRINK IT and if you take this class, or just like to be weird on your own, you can SKETCH PEOPLE from a DISTANCE, all WHILE THEY EAT/DRINK/ARE MERRY as YOU are SIMULTANEOUSLY EATING AND DRINKING AND BEING MERRY. Excuse my somewhat excessive use of all caps but I can’t be the only person that gets excited about this. They call it “sketching” for a reason…because we’re effing sketchy.

Anyhoo, so there’s 8 or so people in the class and we’re all at varied levels of artistic abilities, as evidenced by my brand new sketchbook in comparison to everyone else’s massive, worn in, and graphite-dusted ones. (Note: I’m kind terrible at sketching…so I generally just don’t do it because I make everyone a lot uglier than they are most of the time. Not that they’re ugly. But I guess I lean towards drawing unattractive people so if I screw them up worse, it won’t be THAT big of a deal in my head. I’m, like, really good at rationalizing though.)

One of the tasks for last night was to do sort of a reverse sketch. Mr. Instructor Man gave us each a black piece of paper and a white charcoal pencil and informed us that we were forbidden to draw any lines. We had to pick out the light on a subject and focus only on that…a new way of seeing, he said. “You can’t teach someone to draw, but you can teach them how to see.” Yeah it’s corny, but damn if it ain’t true. I was kinda nervous about trying this out because I’d never done this kind of technique before and didn’t feel like completely embarrassing myself in front of these ol’ pros, but I gave it a shot. And it didn’t suck! It wasn’t incredible, but it was alright. Which made me happy.

Since I know mom and pop are curious about how it came out, I decided to be vain (this word is probably completely unwarranted) and show it here. I don’t need any art critiques people, I just like the way it came out and think it’s a cool way to get started sketching if you’re hesitant. A good, easy way. AND LOOK! I didn’t make him uglier because his face is full of mysterious shadow. Ooooooh. 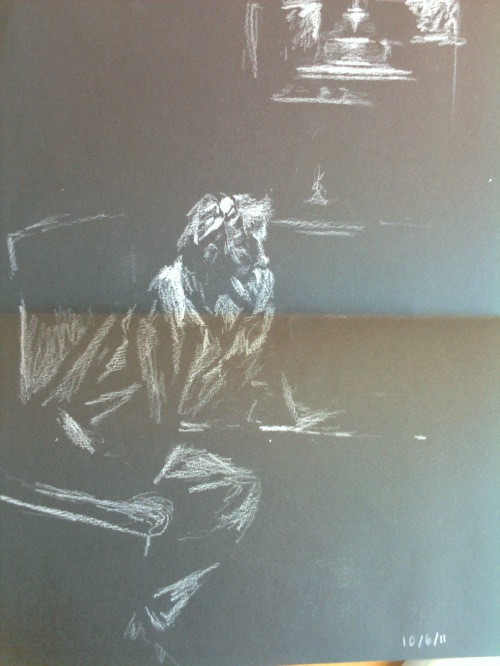 I bet you're digging my cell phone shot. Super high-def.

Note: My mom thinks I’m being too down on myself as an artist. That was not my intention. I was being down on myself as a SKETCHER. Not to brag but I’m, like, a super good artist otherwise. *cue scarf swoosh over the shoulder as I stare nonchalantly out the window, pause, exit room*